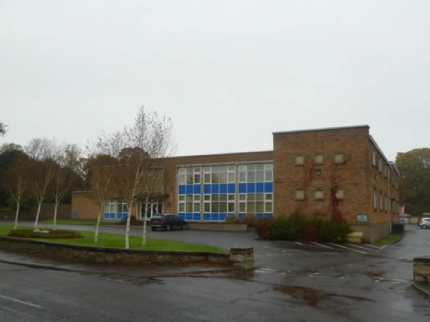 The former Police Station at Cupar had been left unoccupied for some considerable time, resulting in Fife Council issuing competitive tenders for its demolition thus creating a rare opportunity for the acquisition for the purchase of substantial freehold premises within Cupar, offering potential for a variety of commercial, leisure and residential uses, subject to planning.

In accordance with Council tendering procedures, George Beattie & Sons Ltd were awarded the contract which included asbestos remove and demolition works all as detailed hereunder.

Checked to ensure all existing services had been fully disconnected and that the relevant disconnection certificates were inserted into the site safety file. Established the location of the Asbestos Containing Materials within the structure and ensured no further materials were present together with any other toxic substances. Carried out a  needle sweep to establish if any sharps are present.

Executed the removal of all Asbestos Materials including AIB and Asbestos Cement Boarding. All materials were removed strictly in accordance with the Control of Asbestos Regulations 2012 and all relevant Codes of Practice. Work at height was executed from mobile elevated working platforms and aluminum access towers which were erected by operatives, appropriately certified. Materials were deposited directly into sealed skip and removed to a suitably licensed landfill facility in accordance with the Special Waste Regulations.

Once the asbestos had been removed and air clearance achieved we carried out a limited soft strip operation removing doors, residual furniture, carpets, suspended ceiling systems etc. These items were dismantled by hand and deposited directly into general waste skips provided. Once this operation was complete we transported to site specialist tracked demolition rigs (30t) to site and offloaded into the designated working area. The machines were initially fitted with the grab attachments and dismantled the flat roof structure allowing all resultant debris to fall into the void below. Both machines started from opposite ends of the predominantly 2 storey structure and worked towards each other in a controlled systematic fashion. These machines demolished the external masonry walls, concrete floors and internal partitions whilst retaining the resultant debris within the existing building footprint. These works continued in a controlled fashion until the police station structure had been reduced to ground level.

At this stage we fitted machines with their selector grab attachments in order to effectively segregate the resultant debris. We formed separate stockpiles of timber material , metal and brick/concrete debris for removal from site. The timber materials were removed from site to a waste transfer station for recycling purposes whilst metal was salvaged. Concrete and brick debris was put through a mobile crusher reducing materials to 6F2 specification.

Once the debris has been cleared/crushed thus exposing the ground slab we fitted the machines with bucket/hammer attachment in order to break up and remove the slab and foundations. These materials were also put through the crusher for recycling. We then infilled all resultant voids with suitable material and finally levelled and graded the site to suit the existing site profiles.

We thoroughly cleared up and removed all plant and equipment from the site and ensured no debris material remained and the site was then handed over to Fife Council’s site representative.

All contract work [asbestos removal/disposal and demolition etc] was completed on time, including any extensions approved by the Client and within budget, all to the satisfaction of fife Council.