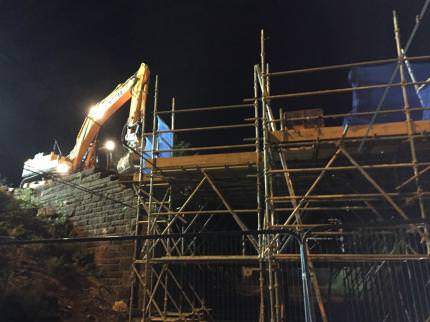 The scope of the works was the dismantling and removal of an accommodation bridge spanning the railway adjacent to the M73 Motorway. The bridge structure consisted of a masonry arch incorporating steel beams and brick jack arch. Steel parapets are present on each side of the bridge deck.

The Main Activities were:

Checked to ensure that any existing services on or within the Bridge Structure had been disconnected or diverted prior to the commencement of any dismantling works. Inserted relevant Disconnection Certificates into site Health and Safety file. No works commenced until confirmation of rail isolation and possession had been given including OLE line dropped.

A 50t mobile crane was transported to site and set up as per the previously submitted lifting plan. The crane was used to lift down track protection items including timbers, terram and sleeper mats. The timbers were deployed on the terram to provide supporting base for the sleeper mats and this protection was installed to cover 5m each side of the bridge. A 5t mini excavator was also lowered by the crane directly onto the track protection. This machine assisted in the installation of the protection over the track and cable trough to completion.

Once all necessary track protection was in place we used a specialist concrete cutting sub-contractor to effect saw cutting to buttress using a track saw. This equipment was fixed to the respective buttresses and saw cut to a depth of 500mm.

With all track protection fully in place we de-rigged the mobile crane and removed from site. We transported to site a 30t tracked demolition rig, which was sited adjacent to the bridge (no loads being permitted on the bridge deck). The tracked demolition rig was in the first instance removed the steel parapets/fence from the top of the bridge and removed from site. With the parapet removed the tracked demolition rig scraped the bridge deck surface prior to fitting the hydraulic hammer attachment. The hammer attachment removed the brick jack area located between the steel beams. The machine worked back from the far buttress allowing resultant debris to drop onto the track protection previously installed. This operation continued until all brickwork around the steel beams had been removed in its entirety. At this stage the machine was fitted with its selector grab attachment, which carefully lifted out the exposed steel beams and put aside. Finally the tracked excavator machine was fitted with its hydraulic hammer attachment, which reduced both buttresses down to the level of the previously executed cut. Debris from the final operation fell onto the track protection in place.

Once the bridge had been demolished the tracked demolition rig was fitted with its bucket attachment, which removed accumulated rubble from the mats to tipper lorries for removal off site. This material was removed to a Waste Transfer Station where it was crushed and reused. The final debris removal was executed by the 5t mini excavator, which scraped all residual materials from the protective mats. The 5t excavator was removed on completion by the crane whilst the track protection remained in place to facilitate new bridge works.